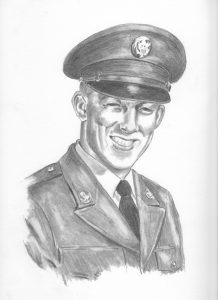 Specialist 4 Willard F. Parish was born June 30, 1941, and grew up in Bristow. He entered the Army in November 1963 and trained as a mortarman.

He was awarded the Silver Star for Gallantry in the first major battle in Vietnam between American and North Vietnamese troops. The unit fought in the Ia Drang Valley west of Plei Me at Landing Zone X-Ray on Nov. 14 and 15, 1965. Parish fired an M-60 machine gun during this battle. He would say he looked to the front and “they (the enemy) were growing out of the weeds.”

When he ran out of ammunition, he stood up with a .45-caliber pistol in each hand and continued fighting the enemy force. He was awarded the Silver Star because of his “courage in the face of the enemy, his determination and heroic actions which saved many of his comrades in that area,” his Silver Star citation said. After the Army he was a country and western band leader and worked for the Oklahoma Turnpike Authority.