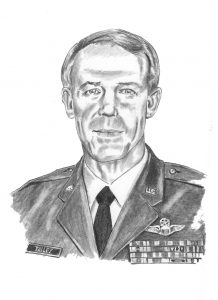 Colonel William H. Talley was born 26 November 1932 and raised in Sayre, Oklahoma. He is a 1955 graduate of Oklahoma A&M College (now Oklahoma State University) in Stillwater, Oklahoma. He earned his commission into the U.S. Air Force through the Reserve Officer Training Corps on 28 May 1955. Talley was awarded his pilot wings upon completion of Undergraduate Pilot Training at Webb Air Force Base, Texas, in September 1956. After completing Advanced Fighter Training and Reconnaissance School, he was assigned to the 29th, 20th, and 17th Tactical Reconnaissance Squadrons (TRS) at Shaw Air Force Base, South Carolina.

In May 1959, Talley deployed with the 17th TRS to Laon, France. He returned to the states in June 1962 and was assigned as an instructor pilot with the 3575th Pilot Training Wing at Vance Air Force Base in Enid, Oklahoma. In October 1966, he was assigned to Sheppard Air Force Base in Texas as a flight test maintenance officer. Talley completed F-105 Thunderchief Combat Crew Training and Wild Weasel Training before being deployed to Southeast Asia in January 1969. Talley flew 151 combat missions as an F-105 pilot with the 44th Tactical Fighter Squadron out of Korat Royal Thai Air Base, Thailand.

Returning to the states in November 1969, Talley was assigned to McConnell Air Force Base, Kansas, as an F-105 instructor pilot and later as an F-105G pilot with the 561st Tactical Fighter Squadron. While deployed on temporary duty with the 17th Wild Weasel Squadron, 388th Tactical Fighter Wing, in Southeast Asia, he flew 31 combat missions. He received a Distinguished Flying Cross with Valor for actions while flying his F-105G Wild Weasel on 21 April 1972 in support of F-4 air strikes against a strategic target. Suppressing hostile enemy surface-to-air missile sites and radar controlled antiaircraft artillery batteries, he enabled the F-4’s to destroy their targets and egress safely. Then on 11 May 1972, while on another Wild Weasel mission in support of Operation Linebacker, Talley and his Electronics Warfare Officer were shot down by a MIG near Hanoi. They evaded North Vietnamese Army search parties for about eighteen hours, but were subsequently captured and taken as Prisoners of War to the “Hanoi Hilton” prison camp. Talley spent 322 days in harsh captivity and was released during Operation Homecoming on 28 March 1973.

Upon return to the states, Talley earned his MBA at the University of Oklahoma and then attended Air War College graduating in June 1976. He was then assigned as Deputy Commander, 35th Combat Support Group, George Air Force Base, California. In May 1978 he returned to Oklahoma assigned to Tinker Air Force Base as the Chief of Weapons Systems and Major Equipment Division under the Directorate of Contracting and Manufacturing, Oklahoma Air Logistics Center. His decorations include the Legion of Merit, two Distinguished Flying Cross Medals with Valor, Bronze Star Medal with Valor, and the Purple Heart Medal. Talley retired on 1 December 1981.