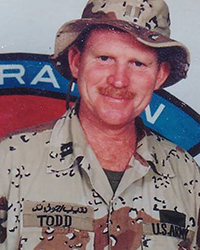 An exceptional example of individuals who serve veterans is Major (Ret.) Joe L. Todd of Bartlesville. Since his notable service in the U.S. Army and employment at the Oklahoma Historical Society, Major Todd has been a volunteer for the Dwight D. Eisenhower Library interviewing World War II veterans, conducting to date over 2,300 interviews which have been archived in various libraries and museums.

He regularly speaks at meetings, appears on television and radio, and authors a newspaper column and stories relating the exploits of Oklahoma veterans.

In 2007 he received the Oklahoma Heritage Association Award for his weekly column of stories about Oklahomans’ service during World War II published in the Bartlesville Examiner-Enterprise.

An active Oklahoma Military Hall of Fame Ambassador, he has established a scholarship through the Oklahoma Historical Society to recognize young students who interview Oklahoma veterans.

His impressive and innovative service to Oklahoma Veterans has spanned three decades and continues without pause. He is truly most deserving of recognition with this award!