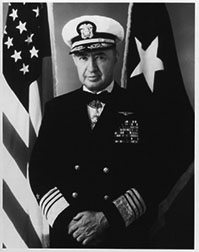 Admiral Joseph J. Clark, USN (November 12, 1893 – July 13, 1971) was an admiral in the United States Navy, who commanded aircraft carriers during World War II. Born and raised in Oklahoma and a native of the Cherokee Nation, In 1917, he was the first Native American to graduate from the United States Naval Academy.

Oklahoma’s genuine Cherokee cowboy and one of America’s greatest military leaders and champions of sea power, Admiral Joseph James “Jocko” Clark was born near Pryor in Indian Territory in the Cherokee Nation and grew up near Chelsea, Oklahoma. He was sent to Willie Halsell College in Vinita and then to Oklahoma A&M (now OKlahoma State University) in Stillwater. Clark graduated from the U.S. Naval Academy in 1917 and received his Naval Aviator wings in 1925. He became one of the most renowned admirals of World War II, often referred to as “the Patton of the Pacific,” and the Korean Conflict. A guided-missile frigate, the USS Clark, was named in his honor and commissioned in 1980. During the Korean Conflict, he was an astute fleet commander and introduced close air support measures that became known as “Cherokee strikes.” He retired as a full admiral from the U.S. Navy in 1953 and was posthumously inducted into the Cherokee Hall of Fame in Tahlequah.