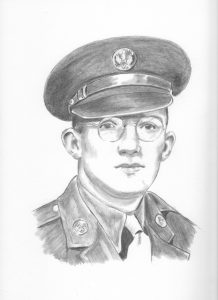 A Marlow native, who was awarded the Medal of Honor posthumously during World War II, will be inducted into the Oklahoma Military Hall of Fame on Oct. 21 in Norman.

Private First Class Herman C. Wallace, who was born in Marlow, Ok., in 1924, was killed on Feb. 27, 1945, when he shielded his fellow soldiers from an exploding mine.

Wallace lived in Texas before the war. He and his family moved from Oklahoma to Texas in 1930 or 1931, for economic reasons, but had deep Oklahoma roots. The family members were farmers, according to a relative.

His parents, Ernest Wallace and Cleatus Shaw, were married in Duncan, Ok. On June 9, 1920. They apparently had lived in Oklahoma some time.

After moving to Texas, Herman Wallace graduated from Lubbock High School and attended Texas Tech University for one year, majoring in engineering.

Wallace joined the Army in 1942 and served in Company B, 301st Engineer Combat Battalion, and 76th Infantry Division. He was killed in action near Prumzurley, Germany while helping clear enemy mines from a road.

Wallace stepped on a well-concealed German S-Type anti-personnel mine. It was called the shrapnel mine or Bouncing Betty because it was thrown into the air, about waist high, and when it exploded it released hundreds of ball bearings, causing many casualties.

Wallace knew falling to the ground in a prone position gave him the best chance to survive, his Medal of Honor citation said. He also knew that doing that would spray the area with fragments and likely kill two of his comrades directly behind him, his citation said. Wallace deliberately put his other foot on the mine and was killed when it exploded.

“Private Wallace was killed when the charge detonated, but his supreme heroism at the cost of his life confined the blast to the ground and his own body and saved his fellow soldiers from death or injury,” his Medal of Honor citation said.

A large installation in the Bad Cannstatt district of Stuttgart, Germany, originally built by Germany, was occupied by American troops after the War. It was named Wallace Barracks in honor of Wallace.