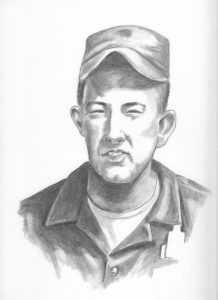 He enlisted in the Air Force in 1955 and was trained as a Helicopter Flight Engineer. He also took Tropical Survival School and was sent to Southeast Asia. He was a member of the 38th Air Rescue and Recovery Squadron.

On Oct. 5, 1966, Hall and another crew member attempted to rescue a downed American F-4 Phantom jet crew. Numerous attempts failed and on one pass Hall and a crew member were wounded by ground fire. The aircraft’s pilot was ready to abandon the rescue attempt because of the wounded Airmen. Hall, though wounded, insisted he and the other crew member were OK. They made another pass and recovered the F-4 crew.

On Feb. 6, 1967, Hall and a rescue helicopter went to rescue another downed pilot. The weather was foul so they returned to base. Later the same day they returned to rescue the plot. They were hit by heavy ground fire. The helicopter caught fire, lost hydraulic power and spun out of control. Hall and other crew members were killed.

For his bravery, Hall was awarded two Silver Star Medals for Gallantry plus a Purple Heart.