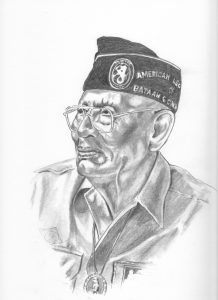 Corporal Phillip W. Coon, a Muscogee Creek Native American, was born May 28, 1919, in Okemah and is a graduate of Haskell Institute in Lawrence, Kan.

He enlisted in the Army on Sept. 20, 1941, and was deployed to Manila in the Philippine Islands. World War II began with the Dec. 7, 1941 attack of Pearl Harbor.

Eventually, American forces on the Bataan Peninsula surrendered to the Japanese. Coon and the others were captured April 11, 1942. He and about 75,000 Filipino and American troops were forced on a 65-mile march to prisoner of war camps. It was the infamous Bataan Death March on which thousands died.

Coon survived and like others was placed in different prison camps. From September 1944 to January 1945, the Japanese moved the prisoners to “hell ships” on which prisoners were taken to Tokyo and then to a POW camp. He and others were subjected to harsh, slave labor conditions.

He was liberated following the Japanese surrender in September 1945. His decorations include the American Defense Service Ribbon, The Asiatic Pacific Campaign Ribbon, the Distinguished Unit Award and the Cross of Valor from the Oklahoma Veterans Commission. (He died June 23, 2014).