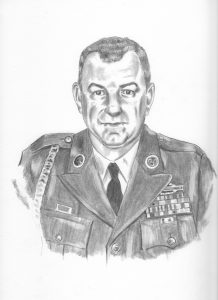 First Lieutenant Lowell E. Jones was born Feb. 8, 1919, in Ada. He enlisted in the Army on Sept. 23, 1941, and served with the 45th Infantry Division in the invasion of Sicily and the invasion of Southern France where he received the Bronze Star Medal and Purple Heart.

After World War II, Jones served as a Second Lieutenant in the 24th Infantry Division. The division and Jones went to Korea in 1950.

In Korea, Jones’ Infantry Company was receiving heavy machine gun fire from the enemy. With “utter disregard for his own safety,” Jones advanced through the enemy fire to an exposed position and attacked the enemy machine gun position until it was destroyed. He received his first of two Silver Stars for Gallantry in that action.

Three months later, Jones and his company fought a numerically superior North Korean Army force. As the enemy was breaking through part of his platoon’s position, Jones called for close artillery support. During the barrage he moved his troops to a safer place and then exposed himself to redirect artillery fire against the enemy. He was wounded but his leadership was instrumental in the defense of his troops’ position. He earned a second Silver Star for that action and another Purple Heart.

Following the Korea War, Jones went into the Army Reserve, serving as a Master Sergeant. He died in 1998.