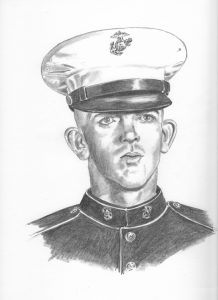 Corporal James T. Johnson was born Aug. 16, 1947 in Wynnewood. After his father’s death, he moved to Davis to support his family as an oil field worker.

He enlisted in the U.S. Marine Corps on Dec. 5, 1967, and completed infantry training. He was sent to Vietnam and assigned as an assistant Squad Leader with Co. C, First Battalion, 27th Marines of the 3rd Marine Division.

On June 5, 1968, he earned the Silver Star Medal for Gallantry during a fight with a North Vietnamese Army battalion. Although seriously wounded, Johnson, then a Lance Corporal, ignored his injuries and delivered rapid counter fire on the enemy with his grenade launcher.

His weapon was destroyed in the battle, but Johnson crawled through a hazardous area to a forward machine gun position and fed ammunition into the weapon for the machine gunner until all rounds were exhausted.

Refusing medical treatment, he organized a unit of litter bearers and directed the movement of 13 Marine casualties to relative safety. His heroic and timely actions inspired all who saw him and undoubtedly helped save the lives of several Marines, his Silver Star citation said.