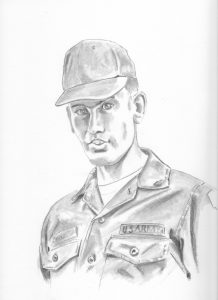 The program was a way to show the nation’s and state’s gratitude by transporting U.S. Military veterans of World War II, free of charge, to Washington, D.C., to see the World War II Memorial.

By the time the Honor flights ended six years later, Banz’ organization had paid tribute to 2,055 veterans on 24 flights. Banz obtained commitments and pledges from various individual and corporate donors to raise the money for each flight ahead of time. Korean War veterans were included in some of the later flights when there were extra charter seats available.

Banz was born Dec. 7, 1945, in Sylvia, Kan. He served as a Chaplain’s assistant from 1968 to 1970 with the Army’s 38th Artillery Brigade in Korea. He later was assigned to the U.S. Army Reserve. Banz’s awards include The Army Achievement Medal and Army Commendation Medal.

Banz was a teacher and coach at Putnam City High School, Ada High School and Midwest City High School. He was elected to the Oklahoma Legislature in 2005. He finished his legislative service in 2016 because of term limits.

The Douglas O. Dollar Distinguished Service Award is for service to veterans and is named for Maj. Gen. Dollar, a Vietnam veteran and founder of the Oklahoma Military Hall of Fame.