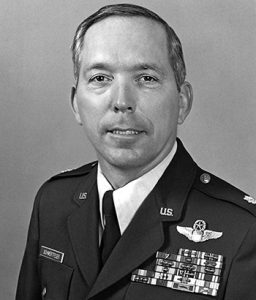 Lieutenant Colonel William R. Schwertfeger was born in Enid, Oklahoma 22 September 1945 and grew up near Medford, Oklahoma. He graduated from Oklahoma State University 30 June 1967 and was commissioned a Second Lieutenant in the U. S. Air Force through the Air Force ROTC Program.

On 18 February 1972 he and his Weapons Systems Officer were orbiting a potential enemy site when their F-4 aircraft was struck by a Russian SA2 missile crippling the F-4. He landed his plane in what he believed to be a fairly safe area however he landed in the middle of North Vietnamese Army soldiers moving forward for the launch into the 1972 Easter Offensive in South Vietnam. He and his Weapons System Officer surrendered and began their 407 days as a POW in the “Hanoi Hilton.”

Lt. Col. Schwertfeger was inducted into the Oklahoma Military Hall of Fame in 2013.