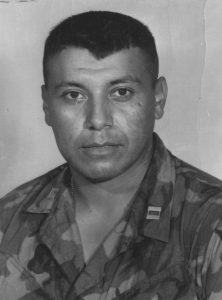 Captain Robert W. Poolaw, Sr. was born 17 July 1938 in Lawton, Oklahoma and grew up on his mother’s Delaware allotted land west of Anadarko as a member of the Kiowa Tribe. Following his High School graduation in 1956, he enlisted in the U.S. Marine Corps and served four years in the communications and electronics career field. In 1960 he returned to Oklahoma and received an undergraduate degree in secondary education from Southwestern State College, Weatherford, Oklahoma. Poolaw re-entered the U.S. Marine Corps as an officer in 1964 and retired after 27 years of active service.

Poolaw completed two combat tours in the Republic of South Vietnam. He was wounded in combat, April 1967, when he was struck in the head and shoulders by fragments from a rocket propelled grenade while leading his Marines in battle on Hill 881 South, located approximately two miles south of the Marine Combat Base at Khe Shan. At that time, First Lieutenant Poolaw commanded Headquarters Company, Third Battalion, Third Marine Regiment, Third Marine Division. His second combat wound occurred during his command of Company G, Second Battalion, Fifth Marine Regiment, First Marine Division in May 1969. Involved in a firefight in the “Arizona Territory,” in the An Hoa Valley Basin, approximately 25 miles southwest of Danang and just three miles east of the Laotian border, Poolaw was wounded by AK-47 assault rifle fire. Passing through his body armor and his right shoulder, the round partially collapsed his right lung. For his service in Vietnam, he was awarded the Silver Star Medal, two Bronze Star Medals with Valor and two Purple Heart Medals for his wounds received and the Navy and Marine Corps Commendation Medal with Valor..

Following tours in Vietnam, he went on to serve the Marine Corps as Company Commander at Camps Pendleton, California, and Lejeune, North Carolina. Assigned as Staff Platoon Commander at the Marine Basic School, Quantico, Virginia, Poolaw served on a 12-man taskforce that emphasized education and leadership addressing race relations for the Department of Defense. Then during the service draw down in 1975, following the war in Vietnam, Poolaw staying on active duty assumed the rank of Gunnery Sargent and was later promoted to First Sargent serving at Camps Pendleton Camp Lejeune. His personal fitness prowess led to his selection to the all-Marine Track and Field Team where he excelled in the 800 meter run.

Completing his 27-year military career in the Marine Corps in 1987, Poolaw retired as a Captain, the highest rank held while on active duty.

In 1996, Poolaw and two fellow Marines organized the Native American Marine Veteran’s Association to help recognize Marines and celebrate the Marine Corps birthday. Open to all Native American Marines, the celebration includes a pow-wow each year honoring selected individuals as well as garnering financial assistance for active duty Marines to facilitate their leave. Poolaw has been very active in Boy Scouts of America in the Anadarko community. Not only did he achieved the rank of Eagle Scout, his example influenced his son Robert Jr., and Robert Jr.’s three sons, to also earn the rank of Eagle Scout.

In November 2012, the Oklahoma City Chapter of the Society of the Sons of the American Revolution awarded Poolaw their Service Medal with Vietnam Bar and Purple Heart Pin. He will be inducted into the Oklahoma Military Hall of Fame October 21, 2016.