Captain Robert J. Kelsey was born in 1945 at Lawton, Oklahoma. In June 1967 he received a commission in the U. S. Navy through the Navy ROTC Regular Program at the University of Oklahoma; he was selected to Phi Beta Kappa and graduated with a Bachelor of Science Degree in Mathematics and Physics.

After flight training in the A-F4 aircraft in June 1969, he reported to VA-23 (Fixed Wing Attack) deployed on the USS Oriskany, CVA-34 in Southeast Asia participating in air operations over North and South Vietnam. When VA-23 was decommissioned in 1970 he transitioned to the A-7E aircraft and reported to VA-146 on the USS Constellation CVA-64 assigned to Air Test and Evaluation Squadron Five (VX-5) at Naval Weapons Center, China Lake, California.

During his tour with VA-105 the Squadron deployed twice to the Mediterranean Sea and for service there was awarded the Commander Naval Air Atlantic Battle “E” and the Rear Admiral C. Wade McClusky Award as the best Attack Squadron in the U. S. Navy. In October 1984 he assumed command from Commander, Light Attack Wing One (LATWING ONE) and was the top pilot in LATWING ONE. His medals awarded include the Legion of Merit, Distinguished Flying Cross, three Meritorious Service Medals, 20 Air Medals with “Vs” and seven Navy Commendation Medals with “Vs”. He retired 4 June 1992 and died 24 June 1992.

“It means a lot. I know there are plenty of other midshipmen who are more than qualified for the award, so to be chosen as the first recipient is very humbling and rewarding,” said Tompkins. “I am honored to be recognized by the Kelsey family and very thankful for the opportunity they have provided. I hope to continue to be a good example in the battalion and the community.” 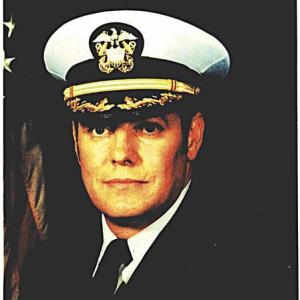 The scholarship endowment was established by the family and will be administered by the Oklahoma City Community Foundation.

“We are extremely pleased about this opportunity to honor Bob’s memory while helping current and future Navy ROTC students,” said Kelsey’s father, Charles Kelsey. “He was very dedicated to God, his family, his country, and the U.S. Navy. He was a tremendous role model for his children, his seven younger siblings and, I’m sure, hundreds of fellow military members.”

“Capt. Kelsey left a great legacy at this university, both as a midshipmen and during his very distinctive service,” said Capt. Rod Clark, commanding officer of the OU NROTC unit at the time. “It is a wonderful thing that his family has created a scholarship to continue that legacy”

The purpose of the University of Oklahoma NROTC Program is to educate and train qualified young men and women for service as commissioned officers in the Navy’s unrestricted line, the Navy Nurse Corps and the Marine Corps. As the largest single source of Navy and Marine Corps officers, the NROTC Scholarship Program plays an important role in preparing mature young men and women for leadership and management positions in an increasingly technical Navy and Marine Corps.

Major General Jerry D. Holmes, U.S. Air Force, was born 14 July 1935 in Jenks, Oklahoma and raised in Wewoka, Oklahoma. He graduated Wewoka High School in 1953. In 1958 he graduated The University of Oklahoma with a Bachelor of Science Degree in Geological Engineering and was commissioned a Second Lieutenant in the U.S. Air Force through the U.S. Air Force Reserve Officer Training Corps (ROTC). In 1964 he graduated The University of Oklahoma with a Master of Science Degree in Aerospace Engineering. He completed Squadron Officer School in 1965, graduated the U.S. National War College in 1976, and in 1985, graduated The Harvard University Program for Senior Executives in  National and International Security.

In September 1966 he was transferred to Royal Air Force Station, Upper Heyford, England. There, he served as an RF-101 pilot and standardization and evaluation flight examiner with the 66th Tactical Reconnaissance Wing. From October 1969 to October 1970 he flew 135 combat missions over all of Vietnam in RF-101 and RF-4 aircraft from Tan Son Nhut Air Base, Republic of South Vietnam.

Maj. Gen. Holmes was inducted into the Oklahoma Military Hall of Fame in 2014.

After a military career spanning more than three decades, Lt. Gen. Max Bunyard’s love for his country and serving others is obvious. Bunyard was standout baseball player at Oklahoma A&M College in Stillwater, and was a leader on and off the field. While at Oklahoma A&M, he was involved in the Army ROTC program, the Blue Key National Honor Society and served as president of the Sigma Chi fraternity.

Bunyard served two combat tours in Vietnam. His first tour was with the First Infantry Division Artillery, serving as an artillery aviation officer. On the second tour, he commanded an aerial field artillery battalion in the First Cavalry Division.

He also was a project manager for the Patriot air defense missile system before assuming command of the U.S. Army Missile Command and Redstone Arsenal, Ala. His responsibilities there included being installation commander of the arsenal and being in charge of Army missile research, development, procurement, fielding and sustainment worldwide.

His last assignment before retirement was as deputy commanding general for research, development and acquisition at the U.S. Army Materiel Command in Alexandria, Va.

In the military, Bunyard found an outlet for his love for baseball. In 1963, he became the 3rd Infantry Division baseball coach while stationed in Kitzingen, Germany, and looked to a mentor for advice.

“I stayed in contact with Coach Greene because I needed some help on how to collect data on the pitchers and players,” Bunyard says. “He was the most helpful.”

He was surprised when he met classmate Don Bliss in Vietnam in 1965. Bliss was the aviation officer of the 173rd Airborne Brigade, and the two shared an experience they will never forget.

“I heard he was there, and I called to see if I could come fly an orientation mission with his unit as I entered Vietnam on my first tour,” Bunyard says. “He said my orientation flight would be with another pilot, and we would deliver supplies to a unit that was currently in contact with the Viet Cong. As we approached the extremely small landing zone in the middle of the jungle, we were taken under intense fire, but we were able to deliver the supplies and get out of there as quick as possible.

“When we returned to the helipad, I asked Don if he was trying to get me killed on my first mission, and we had a big laugh concerning the flight. The helicopter had to be evacuated to maintenance because of the numerous bullet holes sustained in flight. Don and I talked by phone recently and rehashed this incident, and we both remembered all the details.”

Although his list of prestigious awards is long, Bunyard remains humble and says working with people has been the most rewarding experience of his career, a sentiment he echoed during a ceremony for his induction into the Oklahoma Military Hall of Fame in 2010.

“It has been my hope and desire to pass along my passion for working with people to my children and grandchildren as well,” Bunyard says. “I have two grandsons who are pursuing a military career, and they appear to be following this path.”

Bunyard retired from the military in 1989. He is one of seven OSU graduates to rise to the rank of lieutenant general — a title currently held by 43 people in the U.S. military. He became president and CEO of Bunyard Enterprises Inc., which provided independent program and process assessments in the weapon system acquisition field for the U.S. Department of Defense. He sold the company and now conducts research and writing on several subjects. Bunyard and his wife live in Alexandria, Va.

Lieutenant Colonel Edwin P. Ramsey was born in Illinois 9 May 1917 and was raised in Kansas. He was graduated from the Oklahoma Military Academy (Now Rogers State College) May 1938 and commissioned a second lieutenant in the Cavalry Reserve.

He entered into active duty, February 1941 with the 11th Cavalry Regiment at Campo, California. The regiment was ordered to the Philippines in June 1941. Following the Japanese invasion of the Philippines in December he lead desperate rear guard actions against the Japanese and was awarded the Silver Star for leading the last U. S. Army Horse Cavalry charge on the village of Morong, Bataan Peninsula, 16 January 1942. Escaping capture, he formed guerilla forces in central Luzon and, for three years, fought the Japanese Army and the Communist Huks until liberation in 1945.

He was inducted into the Oklahoma Military Hall of Fame in 2010. Read more about Lt. Col. Ramsey. 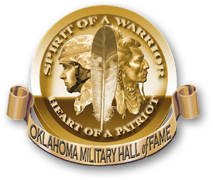 The Oklahoma Military Hall of Fame will honor the state’s Reserve Officers’ Training Corps (ROTC) programs and their alumni this year to mark the 100th anniversary of the national program that has produced thousands of trained officers who’ve led American service men and women in the nation’s wars.

This year’s hall of fame inductions will be held Oct 21 at the Embassy Suites in Norman.

Individuals who are eligible for induction into the Oklahoma Military Hall of Fame can be native Oklahomans or veterans who have had a connection with Oklahoma during their careers. 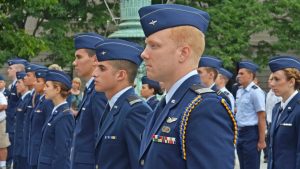 The state’s ROTC programs will be the latest group inducted.
Because this year is the Centennial of the ROTC program, Maj. Gen. Douglas O. Dollar, the founder of the Oklahoma Military Hall of Fame, wants as many Oklahoma ROTC alumni as possible to be recognized for their service to our country.

“We are certain there are alumni of Oklahoma’s ROTC programs in virtually every community in the state,” said Dollar. “We hope to recognize as many as possible and invite them to the hall of fame ceremonies in October.”

ROTC alumni are encouraged to find further information and register to be recognized for their service on a Web site set up especially for the event, www.okrotc2016.org.

The ROTC programs in the nation train college students to become commissioned officers. These ROTC students volunteer for this training and have an obligation to serve in the Armed Forces after graduation from college and commissioning. 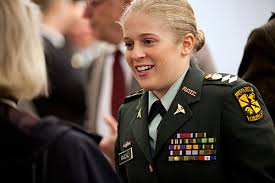 Oklahoma Military Academy was established at Claremore in 1919. It commissioned many of its ROTC students before the school closed in 1971.