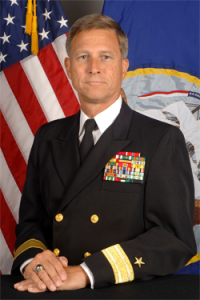 More than 80 graduates from Oklahoma State University have served as generals and admirals in the military service since World War I, but retired Rear Admiral Greg Slavonic (’71) could be the first to publish the leadership insights he learned along the way in a book titled Profiles in Patriotic Leadership.

Considering the ethical failures in the banking industry, Wall Street and corporate misdeeds, Slavonic contends that leadership principles are not being taught the way they are in the armed forces, and his 34 years there have provided a wealth of practical information.

“The need for leadership has never been more important than it is today,” said Slavonic. “I have been fortunate to serve under many good leaders in the military who have a special perspective on how to lead effectively. That’s what I’ve tried to capture in this book.”

Slavonic’s book includes insights from a list of highly honored and decorated military leaders and war heroes who, as he puts it, “…know what it takes to lead and succeed and possess a philosophy of leadership that is critical to success in life. This book was a labor of love that was five years in the making, but it was a passion I had,” said Slavonic. “I wanted to at least get on paper some of my thoughts and the thoughts of those I felt were great leaders.”

Most of OSU’s highest ranking officers are from the Army and Air Force because of its widely-recognized ROTC programs on campus for those military branches, but Slavonic enlisted in the Navy after graduation. He insists he never had any plans to become a high-ranking officer, and admits he chose the Navy so he wouldn’t have to go into the Army, adding “I am not a ‘camper’.” But that doesn’t mean he’s not up for a good workout, “I have climbed three 14,000 foot peaks in Colorado, which offered quite a view of the world.” 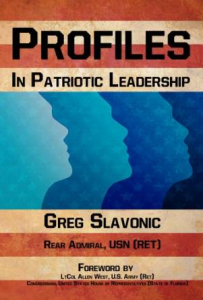 The admiral’s early view of leadership started to take shape when he was assigned to work 12-hour days in the mess hall of the aircraft carrier USS Constellation, which was stationed off the coast of Vietnam in the Tonkin Gulf.

“Finding myself on the ship’s mess decks with a college degree was not something I thought I was going to have to do, but my immediate superior back then knew it would help me someday, and it did. It was an eye-opening experience that shaped me as an individual and helped me move forward.”

Slavonic, who rose from seaman recruit to rear admiral, ultimately served as the Navy’s deputy to the chief of information in Washington D.C. and director of public affairs (Navy Reserve). He was also the highest-ranking public affairs officer to serve in Iraq during Operation Enduring Freedom. Slavonic served on General Norman Schwarzkopf’s communications team when he was deployed to Iraq in the 1990s for Operations Desert Shield and Desert Storm.

Slavonic is dedicated to spending time speaking to organizations on the importance of leadership and sharing his military experiences. He currently works for a Washington D.C. defense contractor managing several Navy contracts.

Profiles in Patriotic Leadership is available at Amazon.com, BarnesandNoble.com and Full Circle Bookstore in Oklahoma City. If you would like to contact Slavonic, go to flagbridge-stratcomm.com.