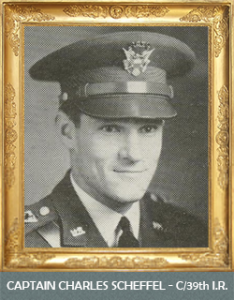 When Charles Scheffel was a youngster in Enid during the Great Depression, he was destined to become a soldier, but he didn’t know it yet.

Scheffel’s father arrived in America from Germany after stowing away on a German boat. He then joined the U.S. Army during the Spanish American War.

Scheffel was born in 1919. His father died in 1930.The times were tough, and Scheffel worked at an aunt’s farm to help out his family.

An athlete, Scheffel was good in tennis, football, baseball and basketball, which was his best sport and would help get him into college. Legendary basketball Coach Henry Iba offered him a full athletic scholarship.

In Crack and Thump, a book written by Scheffel with Barry Basden, Scheffel discussed his entry into the Reserve Officers Training Corps (ROTC), his career in World War II, and gave readers a view of combat. 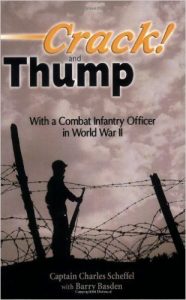 Scheffel had no intention of taking anything more than the mandatory ROTC courses, he said. ROTC turned out to help him not only to get his degree at OSU but to be an infantry leader in combat. He took basic ROTC three times a week. America had the draft and a student could be drafted from college unless he was in ROTC.

Scheffel studied to go into banking, but World War II changed everything and he became a combat infantry leader and a decorated infantry officer fighting in North Africa, Sicily and Europe ,with his final stop in Lammersdorf, Germany, where he was severely wounded.

He was awarded the Combat Infantry Badge, two Purple Hearts, the Bronze Star, the Silver Star and the French Croix de Guerre. He was medically retired from the Army as a Captain in 1946.

Scheffel would go into the insurance business in Oklahoma City. He lived in Britton on the north side of Oklahoma City. Elected to the Britton City Council, he was instrumental in bringing to a vote the annexation of Britton to Oklahoma City.