Today we honor James Robert “Bob” Kalsu of Oklahoma City, Oklahoma, who fell on this day in 1970. 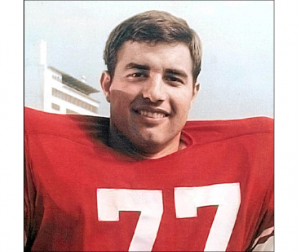 Bob was an All-American offensive lineman at the The University of Oklahoma — and an eighth-round pick of the Buffalo Bills. He was voted the team’s top rookie following the 1968 season. Bob began fulfilling his ROTC obligation with the United States Army and in November 1969, he received his orders to go to Vietnam. He was killed in a mortar attack, leaving behind a wife and daughter. His son was born two days after he was killed in action.