Since 1917, the University of Oklahoma’s Reserve Officer Training Corps (ROTC) has produced military leaders, including two Medal of Honor recipients, who made the difference in winning battles throughout the world.

Many of these early ROTC graduates from OU would fight in World War II, both in Europe and the Pacific. Others would fight in Korea, Vietnam and now Iraq and Afghanistan. As the nation remembers its veterans this Memorial Day, here are some who received their ROTC training at OU:

This year marks the 100th anniversary of ROTC programs in America. The Oklahoma Military Hall of Fame will honor Oklahoma ROTC programs and alumni at its Hall of Fame banquet Oct. 21 at the Embassy Suites in Norman. Because this is ROTC’s Centennial, Maj. Gen. Douglas O. Dollar, of Stillwater, and an Oklahoma State University ROTC graduate, wants as many Oklahoma ROTC alumni as possible to be recognized for their service.

Smith was commissioned an Army lieutenant of artillery at OU. He later resigned to accept a commission in the U.S. Marine Corps where he became a pilot. He became a Marine Corps Ace who shot down 19 Japanese planes and led his fighter squadron on many sorties, accounting for the destruction of 83 enemy aircraft. He was inducted into the Oklahoma Military Hall of Fame in 2010.

Vance entered OU and spent two years in ROTC. In his second year, one of the incoming freshmen and comrades in ROTC was Smith.  After Vance’s second year, he was accepted by the U.S. Military Academy at West Point and graduated as an infantry lieutenant. He went to flight school and was assigned to the Army Air Corps.

On June 5, 1944, Vance earned his Medal of Honor in his second and final combat mission. He flew a B-24 in an Allied attack on German positions on the French coast one day before the Normandy Invasion.

Vance’s plane was damaged by anti-aircraft fire, wounding many of his crew. Vance, whose right foot was partially severed, still managed to fly the plane. It was too heavily damaged to land in England so Vance flew over the English Channel where his crew could safely bail out and be rescued. He then landed in the water. An explosion blew him out of the plane and he clutched a life preserver until he was rescued.

Two months later he was put on a plane for evacuation to the United States. The plane disappeared between Iceland and Newfoundland and was never found. His Medal of Honor was awarded posthumously. Vance Air Force Base in Enid is named after him. He was inducted into the Oklahoma Military Hall of Fame in 2009.

ROTC was mandatory for most students at OU. And after college, many ROTC cadets including Hal Muldrow and Russell Dwight Funk joined the 45th Infantry Division, a National Guard Division that was organized in 1923 and would be mobilized for World War II and again for the Korean War in 1950. Funk joined the Division in 1923 and Muldrow joined it in 1928. 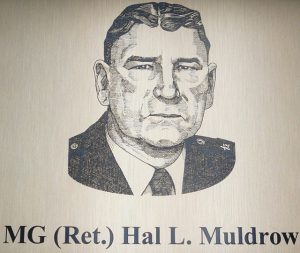 Muldrow, who lived in Norman, eventually would command the 45th. Funk, of Oklahoma City, would be a Colonel and would make the Army his career.

At Salerno, the two officers and their men would keep the Germans from winning the battle. During fighting at Salerno, Germans found a gap in the Allied forces that led to the ocean.

Intent on pushing the 45th and adjoining forces into the sea, the Germans launched a counterattack of tanks and infantry down that gap and toward the ocean. A volume of Time-Life Books World War II series said it best in crediting the 45h with saving the invasion.

The two artillery battalions fired eight rounds per minute per gun, “a rate perhaps unsurpassed by any artillery in World War II,” Time-Life said. Together, the two battalions fired 3,650 rounds, stopping the German attack and preserving the Allied beachhead.

OU ROTC cadet Ernest L. “Iron Mike”  Massad  would join the 11th Airborne  Division as a battalion commander of artillery and fight in the Pacific.  Massad was an OU football player, basketball player and track man. He was named to several All-American football teams. He later was a Major General, commanding the Army Reserve’s 95th Division (Training). He held the three star rank when he served as Deputy Assistant Secretary of Defense from 1969 to 1970.

Bob Kalsu was a University of Oklahoma All-American tackle in 1967. Kalsu played one year for the Buffalo Bills and was named the team’s top rookie. He was an ROTC graduate and went on active duty after the 1968 football season. A Lieutenant in the artillery, Kalsu was killed in Vietnam on July 21, 1970.