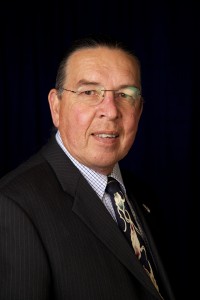 A U.S. Marine Corps Vietnam veteran, Harvey Pratt was recently recognized when the Smithsonian’s National Museum of the American Indian announced the winning concept design for the National Native American Veterans Memorial. Cheyenne and Arapaho artist Pratt’s Warriors’ Circle of Honor will be located on the museum grounds on the National Mall in Washington, D.C.

Considered one of the leading forensic artists in the United States, Harvey has spent over 50 years in law enforcement, completing thousands of witness description drawings and hundreds of soft tissue reconstructions. Harvey is a Cheyenne and Arapaho tribal member and is recognized as an accomplished master Native American Indian artist. He has won numerous awards and was named the Red Earth 2005 Honored One. He is a self taught, multi-talented artist involved in many media; oil, acrylic, watercolor, metal, clay and wood.

Harvey began his career with the Midwest City Police Department in 1965 where he did his first witness description drawing a year later. This first attempt in forensic arts resulted in an arrest and conviction. He joined the OSBI in 1972 as a narcotics investigator and retired in 1992 as an Assistant Director. His expertise in witness description drawing, skull reconstruction, skull tracing, age progression, soft tissue postmortem drawing and restoration of photographs and videos have aided law enforcement agencies both nationally and internationally.